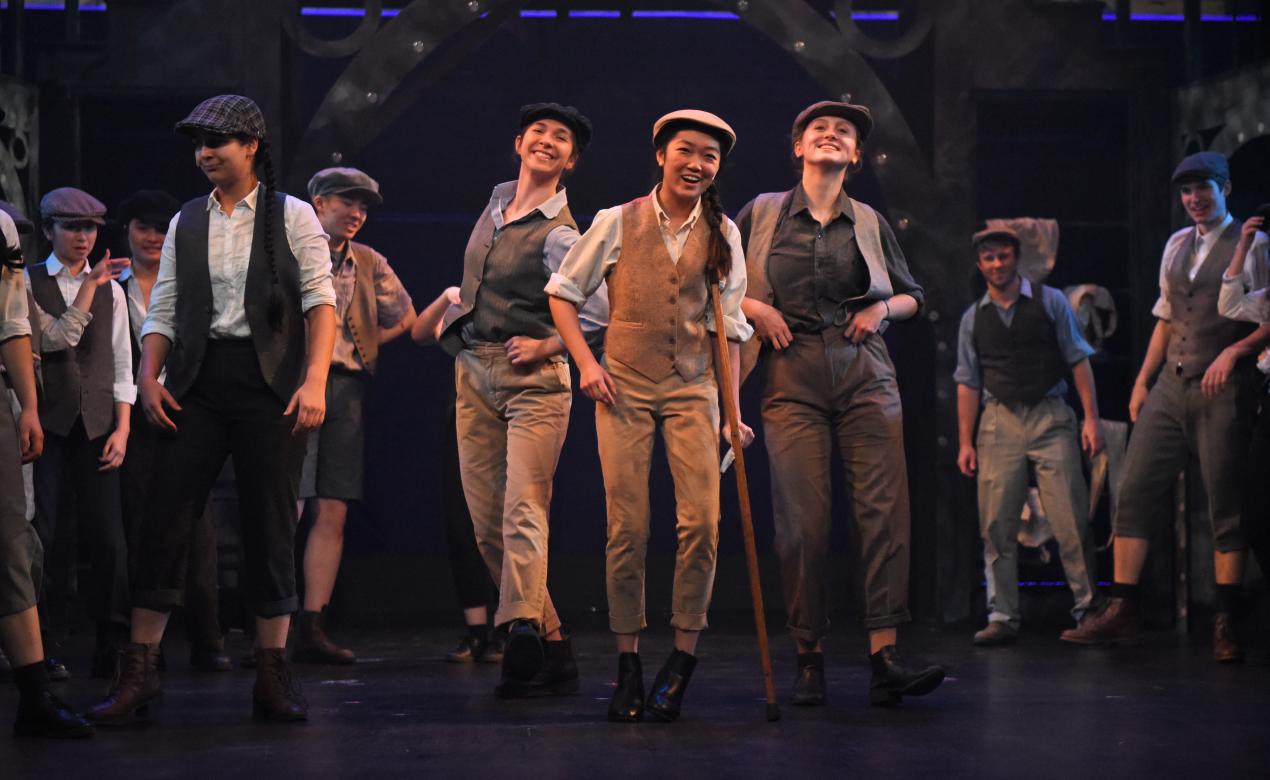 This year’s Senior School musical theatre production, NEWSIES, is on now at the McPherson Playhouse. More than 90 students have been putting their creative skills on display on stage, backstage and in the pit orchestra for the last five months to each play an important role in bringing our musical to life.

The SMUSpaper is sitting down with students who are performing as actors, singers and dancers; students working behind-the-scenes; and students who help create the live soundtrack as members of the orchestra to talk about their experiences.

What is your background in musical theatre?

Theo – My first experience was my first year at SMUS when we did the Grade 5 opera, The Gypsy Baron. I remember discovering then how much I loved to be performing and being in front of people and presenting something we had worked so hard on. It was such an amazing feeling. I was in the musicals at the Middle School, too, and this is my third musical at the Senior School.

Mark – I had done some performing in small plays before I came to SMUS. It was more of an extracurricular activity that the school offered for a small group of students. We had done some smaller shows, and I really enjoyed being in them and seeing all of the self-improvement and improvement in the cast each year. This is now my fourth SMUS musical.

Evelyn – My first experience was a really short Christmas musical in Grade 3, and then we did a long musical called iSpy when we were in Grade 5. I really enjoyed that experience and realized then that I loved theatre and I loved singing. I’ve also done the last three Senior School musicals at SMUS. Theatre was always something I enjoyed on the side so I figured it was worth getting involved at the Senior School.

Paris – Like Evelyn, my first experiences were the Grade 3 and Grade 5 musicals. I remember having a lot of confidence in my singing and acting abilities in Grade 5, which helped me realize how much I loved doing it. We did The Wizard of Oz at the Middle School and that was really a highlight of Middle School for me, so I’ve continued with the musicals every year at the Senior School.

Tell us about your character.

Paris – Katherine Plumber is a really strong woman. It's pretty cool that she’s making a living as a journalist in 1899 in a world full of men. I love that even though she’s kind of one of the guys and she finds her place among the newsies, she very much still has her own personality. Even though she’s the love interest, it doesn’t diminish her character at all; it makes her a better character because she comes in with these skills that she uses to help people in need.

Evelyn – What initially attracted me to Katherine was simply the fact that she’s the lead female in a musical that has mostly male characters. It wasn’t until I got the role that I discovered just how interesting of a character she really is. Once I read her lines I fell in love with just how strong and sassy she is.

Mark – Jack Kelly is a charismatic union leader. He's the lead newsie so he sort of oversees all his fellow newsies. They all look up to him and go to him for advice because he’s the guy who has the most experience. The newsies have a lot of respect for Jack; anything he says, they'll all follow. He's very commanding.

Theo – Jack is quite tough because it's a very tough time to be in a rough city to be part of a rough group of newsies, and Jack is at the forefront, being macho and not showing too much emotion to begin with. I feel like what's special about his character as the play goes on is he has so many of these new experiences that expose such a different side of him, so you can really see a lot of character development and a full range of emotions throughout the play.

How do you get into character?

Mark – Obviously we haven't had the experiences that he has had in his life, but I just try to imagine what life would be like if I was really there. A lot of how I portray Jack is based on what I've learned about him as a character by reading about him online and picking up on character traits by watching how Jeremy Jordan portrayed him on Broadway. And [director] Mr. Collett gives us a lot of background as we're working through scenes, talking to us about what could be going through Jack's mind at any point.

Theo – I think we're really fortunate because we're basically his age, so although there are a lot of experiences we can't fully empathize with, there are definitely moments from our own lives to draw from. Although the vocabulary may be different, and the time period is different, and there's different external factors at play, a lot of the internal emotions will be similar because we are at a similar stage in development to Jack. I can get into character by looking in to myself and being like, "Well how would I be in this kind of circumstance in real life?"

Paris – Evelyn and I really good friends, but in six or seven shows together, we’ve never actually interacted on stage before. So being able to share a role let us still work together but in a different way.

Evelyn – We let the other person have their freedom but we are really comfortable giving the other person suggestions or direction. We interpret the character very differently, but still need to ensure that it’s the same character no matter which show you go see. Paris, when she becomes Katherine, she is a very strong, determined character. She focuses on different strengths, particularly her ability to be up front as a strong female in a male-dominated world.

Paris – In Evelyn’s Katherine I see this more intellectual character. Her Katherine is more reserved but she is very aware of what’s going on in a more calculated way. I love being able to work with her because we take notes from each other and there are things -- gestures even -- that I’ve seen Evelyn make that I’ve stolen and altered to bring into my Katherine. I think working together allows us both to bring the best possible Katherine to light.

What do you love about musical theatre?

Evelyn – I have always had a love for singing, theatre, acting and putting myself out there. And theatre is one of the only things I’ve found where I find joy in challenging myself and striving for more, as opposed to getting discouraged by the challenge.

Theo – This is such an irreplaceable experience for high school; I can't think of anything else that parallels it. I use music as an output for my thoughts and emotions; to be able to express that in front of people in a creative medium is something you really don't get many chances to do.

Paris – I just find the whole experience is about happiness; it makes me happy, it makes other people happy and we should try to bring more of that into life.

Mark – Performing on stage puts you in this state where you really feel like the character when you're on stage; it takes your mind off of like everything else. I love being able to do something that really transforms you into this new world.

What’s the best part about being in a SMUS musical?

Theo – Definitely the community and the performance itself. The word 'family' comes up a lot and it might sound cliché, but it is, especially when the show's on and you're with these people every day it does become like a family in some ways.

Paris – It really is a great community of friends. I’ve gotten to know so many amazing people through musical theatre!

Mark – I've become such good friends with people I may have never talked to or hung out with because the musical brings together students from every grade; it really unites the Senior School as a whole. I think what brings me back every year is ultimately the performance; there's no other experience like that. On closing night every year when the curtain comes down there's this huge emotional embrace where everyone's crying because we all know it's a once-in-a-lifetime experience.

Evelyn –The musical is always a way for me to make friends with so many different people; that’s definitely the stand-out highlight for me every year.

Why should people come see NEWSIES?

Evelyn – It’s a fun musical. The entire point of this musical, even though it’s about the newsboy strike, is it’s about having fun with fun music and fun dancing. It’s a really uplifting show to go and see!

Mark – You'll be on the edge of your seat the whole musical. It's so exciting, there's so much going on, it's a musical but it's also an acrobatics show with people flying around. Every scene is so unique and every scene is so different.

Theo – It's very captivating; there’s always something going on! You’re singing, but at the same time you’re dancing or delivering a paper or doing some sort of acrobatic move or you’re interacting with the elaborately build set.

Paris – People like what other people are passionate about, and we’ve all worked so hard for these past few months to put this show on. Everyone puts on an amazing performance and when you see it, you can see how much work everyone’s put in, how much fun they’re having and how passionate they are about the musical.

NEWSIES runs from March 5-7 at the McPherson Playhouse. There are three evening shows (March 5, 6 and 7) and one matinee (March 7).