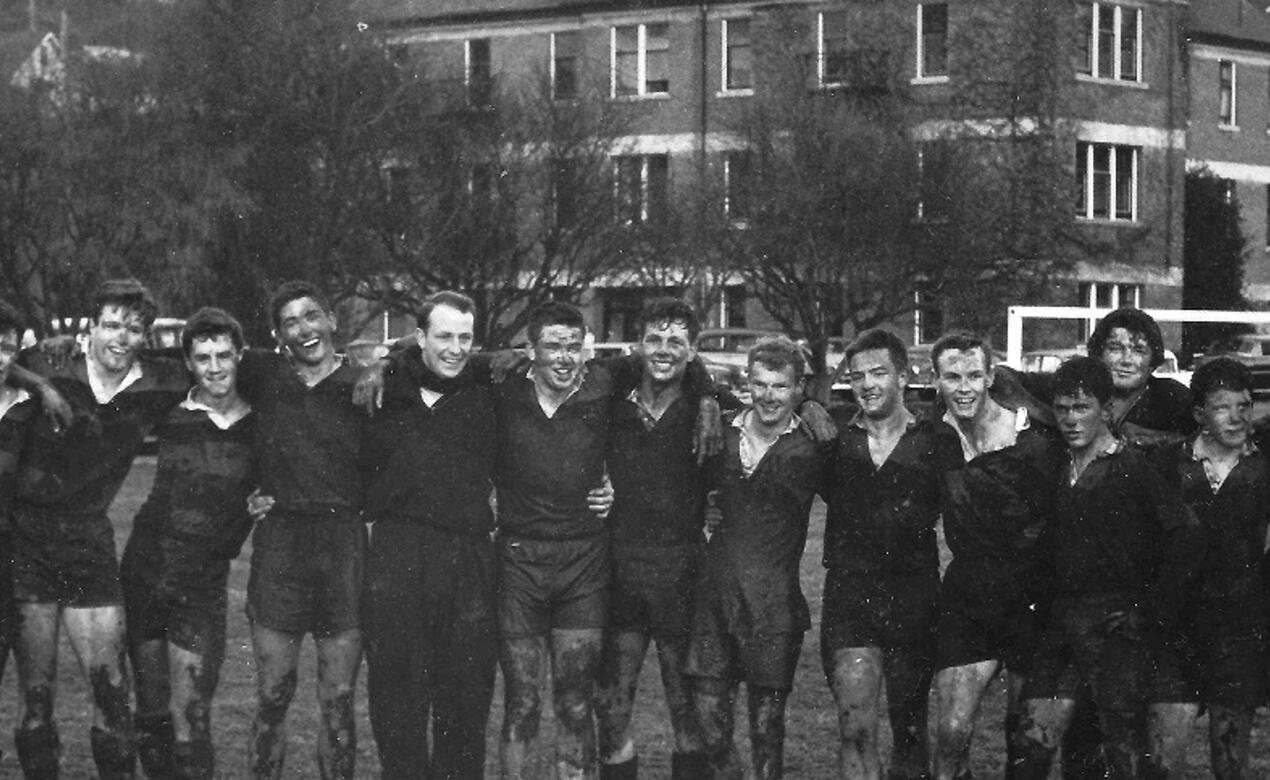 Of all the teachers you had in your school years, wherever they were spent, apart from one or two who might have inspired you, how many can you remember? Probably many.

Now how much of the material that all those teachers inflicted on you during those years – the hours of classes, the homework, the studying, the tests – do you remember?

In most cases, the subject matter has long slipped away. It is the personality of each teacher, man and woman at the front of the class or walking up and down the rows of desks, dispensing (one hopes) interest and words of encouragement, or in some cases confusion and implied threats of punishment with dire warnings. The style and techniques of teaching have changed enormously and for the better since the middle of the last century when I was a boy at this school. However, it is the character and idiosyncrasies of their sometimes eccentric teachers, not the course content, that alumni talk about with a smile. Indeed, the men who taught us (there were no women teachers at University School in my time) gave us lots to reminisce about.

It might be interesting, even revealing, to know truly how today's students view those in charge of their life, time and education now.

I was asked to write something for this publication, “...something about the University School during my time as a student”, a nice wide mandate. So these will be a mixture of fairly objective observations tainted by highly personal memories.

I came to Victoria and University School in September 1956, aged 12, to start Grade 7. We had just moved to Canada from Sri Lanka where I had lived all my life, attending schools, studying in classrooms where often I was the only white child among Tamils, Sinhalese and Muslims. Teaching was done in English, but with a heavy native accent which I had to adopt in order to survive among the other boys. As a result of our move, everything in Victoria, and especially at 3400 Richmond Road, seemed vivid, for better or for worse.

The variety of teachers in this new school seemed especially so. There was certainly a variety of them!

A child views and values people by how they relate to him or her. This was hard for us because teachers at the time tended to be aloof and distant. In University School in the mid-’50s, many of the teachers had been there for decades and were elderly, teaching their classes and existing in a sort of far-away stratum above us, not seeming to want to know us as individual children. The exceptions were the sports “Masters” who came to know the boys they coached.

Today in the 21st century, the emphasis is on communicating the beauty of the material studied, and teachers can get to know their students as they pass on the sacred flame of enthusiasm along with the content. The stress back then was to fill our heads with facts and a few techniques, both to be memorized and regurgitated in examinations.

The day-to-day running of student life in the school in the 1950s was done by the prefects, a selected group of Grade 12 students who were given authority and power, so even here contact with teachers was limited.

All this mostly applies to the routine of “day boys” who lived at home. Life was somewhat different for boarders, who lived in the dormitories of the school. They got to know and be known by the “house masters,” most of whom were fairly young. Compared to the closeness and care given to students today, this relationship would seem cold and remote with its emphasis on collective behaviour and discipline. This was reflected in the first term of the year by the number of junior “runaways.”

Most of the teachers were good men, though distant in their approach. This distance is also reflected in the frequently laconic nature of comments on end-of-term report cards. Many teachers just didn't know much about us. But as for personalities for us to watch, there were lots of these on the staff.

In a “them and us” culture, the underdogs may show a covert resistance. In this case it was nicknames given to some of the teachers by the student. The senior English teacher, a retired principal from Vic High, was “Harry the Bear.” One of the French teachers was “Barney.” This pleasant old gentleman was also the Head of Boy Scouts in Victoria and sometimes when there was an official Scout function in the city, he would teach his classes dressed in full Boy Scout uniform. Mr. Lance Storr, who taught Latin and ran the shooting range, was inevitably nicknamed “Caesar.” Mr. Reg Wenman, whose statue now stands by the gate, was “The Bird.” He was a distinguished rugby player and cricketer, and was one of the few teachers who took the trouble to get to know most of the boys, so he was regarded with real respect. Ruggedly conservative, Mr. Wenman’s philosophy regarding teenagers and the anguish that the outside culture told them they should be suffering could be resolved by “putting a boy in a pair of shorts and sending him on a five-mile cross country run.”

Probably the two most picturesque teachers, and at the same time the most scholarly, were Mr Leslie Hinton, the senior chemistry teacher, and the Senior Latin teacher, Mr. Cyril Genge.

Mr. Hinton, a distinguished Cambridge University graduate, used to arrive in the morning in his little three seater, front-opening Isetta bubble car. His nickname, “Meeth,” came from his appearance and manner of speaking, and his hobby was repairing the mechanical watches used by most of the boys. Mr. Genge was an outstanding classics scholar, fluent in Latin and Greek. I could never understand why he did not teach in a university. On the outside of the Chapel door there is a small poem by him in Latin and English, well worth reading. He had his idiosyncrasies, too, a dry and cynical sense of humour and in an age before the sport of jogging was in general use, he would run for hours around the playing fields, dressed only in small black shorts, bare topped, his deeply dark body and runners’ legs pounding out the miles, and occasionally inspiring phone calls from passers-by to the headmaster that there was a naked man running around on the campus.
These nicknames were used with an undercurrent of genial respect. The truly nasty teachers were not awarded the honour of a nickname.

During my years in Grades 9 and 10 and the two senior years, the school underwent enormous changes. The wages for teachers were low at University School at that time, but still higher than those paid to teachers in England. Mr. Timmis, the headmaster, used to take trips to England to recruit young teachers there, many of whom had Oxford and Cambridge degrees and had attended good English Public Schools and who knew what a good school should be. Many just stayed for their contracted two years then moved on to the better paying jobs in the Canadian public school system, however a good number stayed on at University School. They generally lived on campus, organized activities, took students on trips, and most of all got to know students individually. Besides, these teachers were younger, cooler and involved. They brought in a new attitude, replacing “them and us” with a spirit of cooperation, along with considerable British flair and flamboyance. With the friendlier relationship between the students and teachers during my last two years, the desire for nicknames diminished. The two-year project to build the Chapel, with teachers and students working side by side raising money and doing the physical labour, really established the unique ethos of mutual respect, with wise guidance that characterizes the school today.

I eventually taught at St. Michael's School and SMUS for a good number of years and shortly after I retired I learned of a website called Rate My Teacher. Of course, who could resist? I looked myself up. The comments were kind, but one girl had written “...he tends to be eccentric, but that is part of his charm”. Me? Eccentric? Never! Oh well, I guess there is something to be said for tradition.

We recognize our students and alumni who have competed at the provincial, national and international...
Read
More news