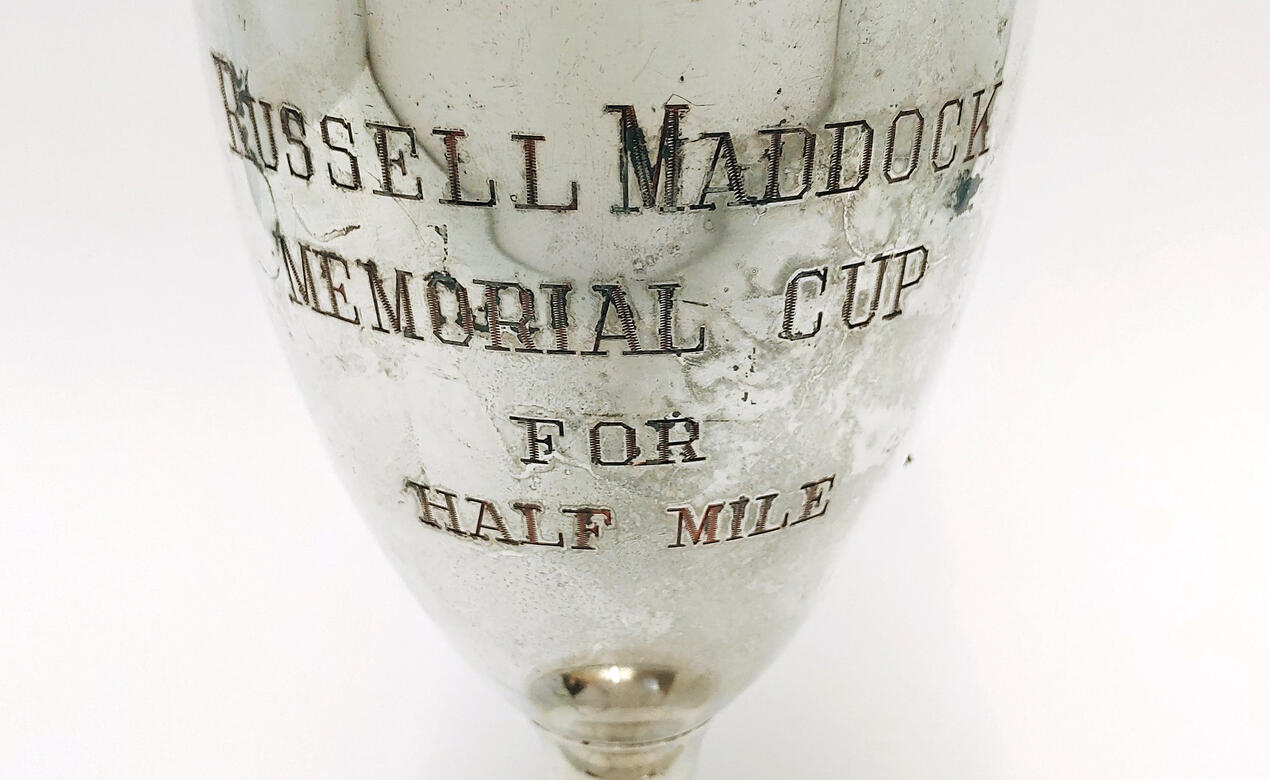 One of our Jubilee year projects is "Waiting to Be Remembered - Stories from St. Michael's School," a collection of incredible stories of connection and coincidence involving St. Michael's School Old Boys, researched and authored by Michael Nation (SMS '70).

Between January and June 2022, we will release stories by Michael Nation and we hope you will enjoy reading them.

The photograph below shows the St. Michael’s School Fifth Form (Grade 9) class from 1958-59.

Just seven boys almost ready to head off into the world.

They seem a pretty happy group. 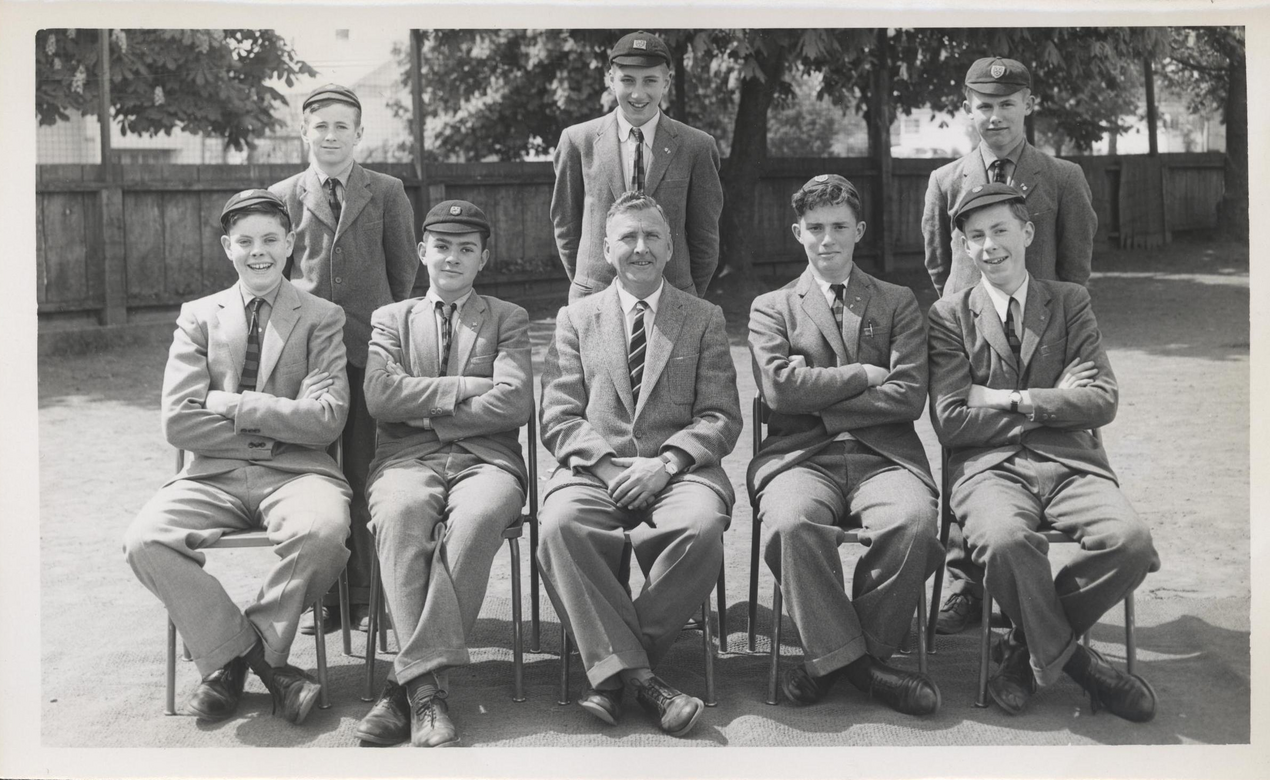 Bob Henderson, the Head Boy that year, became a big game guide outfitter in the Spatsizi, a plateau in the upper basin of the Stikine River in north-central British Columbia. (Spatsizi is 500 km north of Hazelton, and 600 km south of Watson Lake on the Yukon border. Wildlife biologists say that the Spatsizi is the North American equivalent of East Africa’s Serengeti ecological area. Bob has written a book about his life as a guide outfitter in northern BC, In the Land of the Red Goat.)

Julian Greenwood became a lawyer and a fine musician.

Mike Symons, one of the founder’s two grandsons, was a provincial civil servant.

Larry Eastick was a longtime technical director for theatre productions. A wing of the McPherson Playhouse in Victoria is named after him.

Shortly before Christmas 2019 (just prior to the onset of the COVID-19 pandemic) I walked into The Wilson Archives on a Wednesday morning for a regular research session. On the way to my desk I noticed two sports trophies that had not been on the table the week before. The sight of them rang a faint bell in the long-term memory area of my brain.

Rob Wilson, the patron of our school archives, explained that the owner of a second-hand store in Sidney, BC, had just turned in these two old St. Michael’s School sports cups. He had somehow acquired them, read the school name, and was kind enough to return them to our school.

From the engraved years and winners’ names they were last awarded in 1969 and 1973. One was slightly the worse for wear, having lost both its handles. Nevertheless, they were back in our hands after a “vacation” of 50 years.

Hearing the bell in my head a little more insistently, I took a look at them. The first was for the Intermediate Sports champion, meaning the best all-round track and field athlete in grades 6 and 7. The second trophy, from the same era, was awarded to the winner of the longest race of the St. Michael’s School sports in those days, the half mile.

I remembered hearing, at the 1966 sports day awards presentation in the gymnasium of what is now the Junior School, headmaster Mr. K.W. Symons explaining to the assembled crowd of boys, parents and friends of St. Michael’s that the half mile cup had been donated that year in memory of a recent Old Boy, Russell Maddock.

Because I knew of the half mile cup and recognized Russell’s name, I wondered who had donated it, and why in Russell’s memory. I thought that I remembered Mr. Symons also saying it was donated by a classmate of Maddock’s. To find out which one I tracked down three of them: Mike and David here in Victoria, and Bob in northern BC.

None of them could remember who had donated the trophy but the reason for the donation was well known and, with a little detective work, the details emerged.

Russell had joined the federal Department of Transport in September 1963, two months after his high school graduation. The next year he was working as a seaman on his first Arctic voyage, aboard the icebreaker Camsell. The ship’s 1964 western Arctic summer patrol started in June on a five-month cruise. It was a difficult one, with the worst ice conditions in 32 years – sometimes up to 15 feet thick. While in the Gulf of Alaska on its way home early in October, the Camsell was hove to in a 36-hour gale. In the high seas on the afternoon of Sunday, October 4, the hydrographic survey launch, the Quail, broke loose from its deck moorings.

Russell was sent on deck with a party under the command of the boatswain. While attempting to secure the Quail, Russell was killed and two other young Victoria men, 21 and 18, were injured. The ship returned directly to the port of Victoria, and within a week the coroner’s inquest had ruled Russell’s death an accident.

My memory about the donor was wrong. Some more time searching St. Michael’s School records in the archives revealed that it was the parents of David Cohen – good friends of the Maddocks – who had donated the cup in Russell’s name.

It is coincidental to the point of being bizarre, that I should be volunteering in The Wilson Archives when these cups were turned in. Of all the school sports trophies that existed then, I had won both. The reason I remember Mr. Symons announcing the Russell Maddock award was because I was called up a minute later, as the first winner. I had won the Intermediate Sports trophy two years earlier.

How the cups got to the store in Sidney I don’t know. In the 1960s, at the end of a year of holding the cups, I gave them back, and there were winners in subsequent years, so the caper can’t be pinned on me. If you (dear reader) were the last winner of either cup, let me know how they got from your house to the second-hand store half a century later!

When speaking to Russell’s former school friends in January 2020, I learned that by another coincidence Bob Henderson was scheduled to visit Victoria in April and so a reunion of the St. Michael’s School class of 1958-59 was being planned. We were hoping to reunite all the remaining members of the group of seven, including Peter Gough in Australia, if that was possible. (Does anyone know Peter’s whereabouts?) The reunion, however, became a COVID-casualty as Bob had to cancel his travel plans.

I hope that the reunion will still take place. If it does, I’ll polish up Russell’s trophy for the table, and his old classmates can drink to ‘absent friends.’ 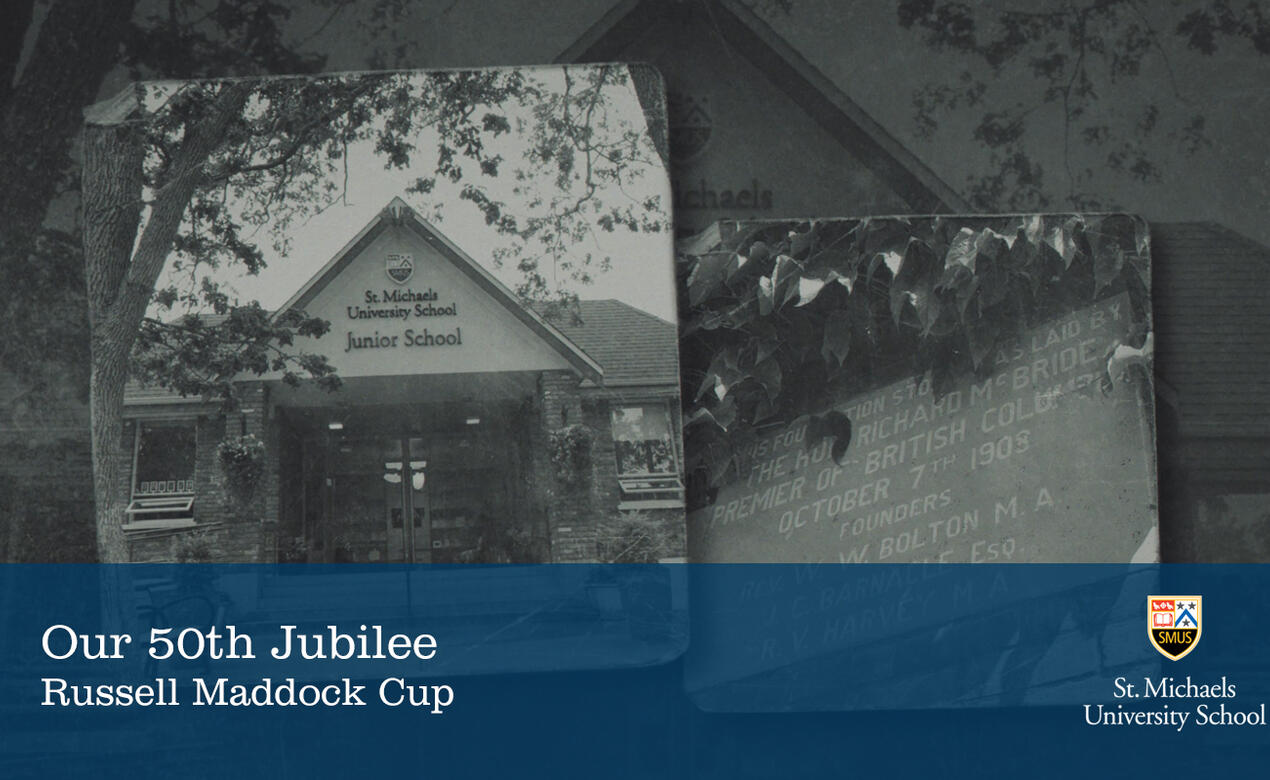 Michael Nation (SMS ‘70) has been volunteering in The Wilson Archives identifying boys in the series of St. Michael’s School photographs going back to its beginning in 1910. If any reader knows another St. Michael's School story which should be resurrected, please contact him through The Wilson Archives.

We recognize our students and alumni who have competed at the provincial, national and international...
Read