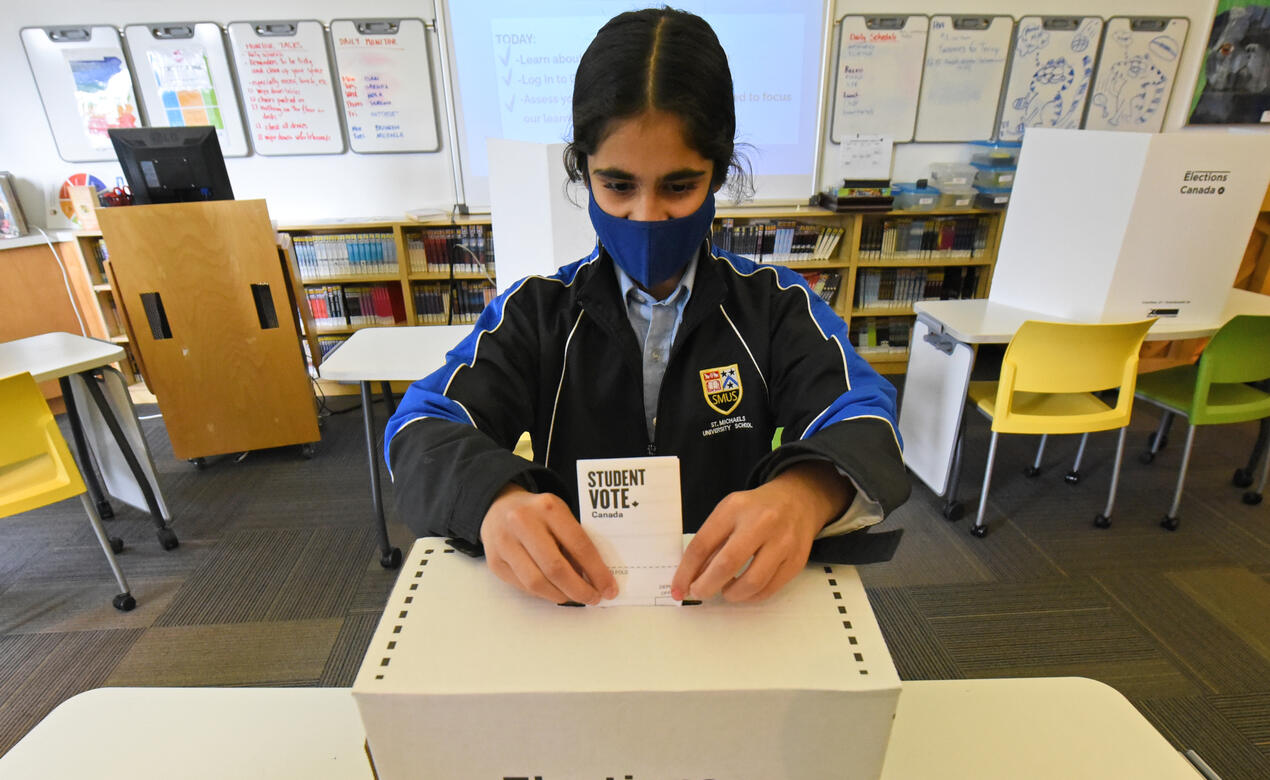 Middle School students will join adults provincewide by exercising one of their democratic rights and voting in the municipal election.

Students in Grades 6 to 8 will participate in Student Vote, a mock election that happens in tandem with the BC elections, to help them better learn about government, democracy and the process of voting.

“It’s more impactful for students to learn when there’s something going on in their lives that we can tie it to,” says Mr. Jake McCloskey ’09, who teaches Grade 6 Humanities. “Voting in the Student Vote is fun and we’re giving them the chance to participate in something that’s super vital for democracy. We’re hopefully making it exciting and memorable, and making it easier for them to vote when they become voting age.”

Since the start of the school year, Grade 6 students in particular have had unique opportunities to learn about government – one of the key focal points of the Grade 6 Humanities curriculum – through current events, including the death of Queen Elizabeth II (as students were learning about the different forms of government), next week’s municipal election, and the ongoing leadership race to become BC’s next premier.

Jake says the visibility of the municipal election in our community – students see candidate signs as they drive to school and they hear talk of the election on the radio or at home – helps students better understand the in-class lessons.

Since the Middle School campus is located in the District of Saanich, Jake’s Humanities class is preparing to “vote” in Saanich by researching the candidates for mayor, council and school board. Students will then present their findings to their classmates.

“We ask students to do research without forming an opinion. Because there are so many people running, we want our students to focus on platforms, the issues that are important and tangibles – do they have a concrete plan?" Jake says. “We’re helping students get the skills to look beyond, ‘This candidate seems cooler and they have the best website,’ and understand the research skills that it takes to use active reading to pick out what’s important, what’s not important and what a candidate values.”

This research will help students when they cast their ballot in the Student Vote next week. These skills, Jake says, will hopefully help students long after this municipal election cycle.

“I want them to be using those skills a couple of years down the line when they’re voting in a federal or provincial election, too. What’s great about municipal elections is the lack of political parties; even though it makes it harder to find information – and there are way more candidates to research – it helps students better develop those key skills,” he says.

The research and subsequent mock vote also allows students to reflect on what issues are important to them as 11-year-olds.

“We’ve talked about the principles of democracy, and democracy in Canada, which leads into talking about the issues that matter most to a Grade 6 student. ‘Do you think the priorities of a 70-year-old are the same priorities that an 11-year-old has? No, probably not,’” Jake says. “That frames their understanding of the importance of voting. They understand that if only 70-year-olds voted, a government would be elected that better suits them and not students. We looked at government quite broadly and now we’re taking it small and local to understand that every vote matters. And then students get to experience that, and hopefully piece together that that action – voting – is very important for democracy.”

A SMUS houseparent, Jake is also a Saanich resident, meaning he will participate in the same election – albeit the real one – that his students vote in.

"I will do research on my own, of course, but I also have 16 junior researchers who will read through the platforms and who are going to help inform me. Before I vote, I will get to learn about what's important to my students and what they value. Many of them live in Saanich, and how I vote can have an impact on their lives, too."