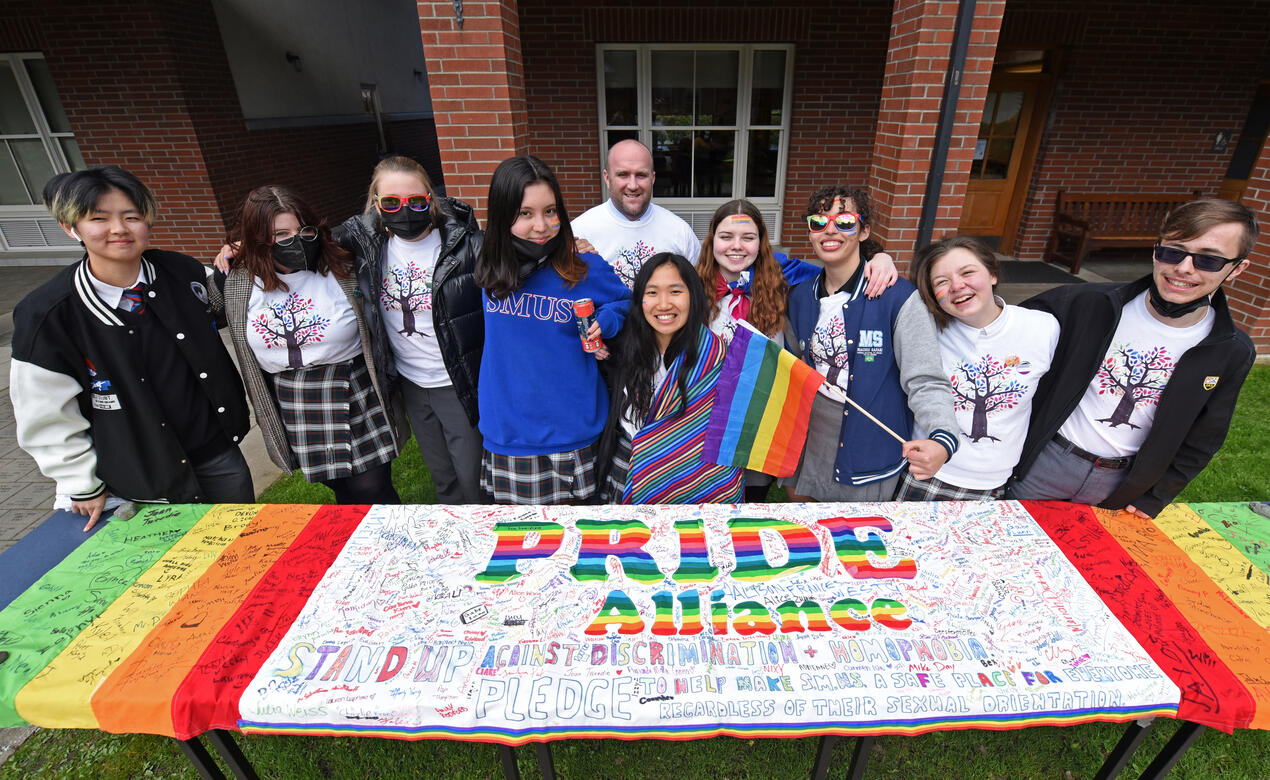 This week, our community came together to celebrate Pride Week on campus. It’s an important event that we use to educate, to highlight why visibility matters, to celebrate progress, and to shine a light on the ongoing struggles to create a safer world for members of the LGBTQ2S+ community.

Senior School students in our Pride Alliance and the Queer History Club took this opportunity to help further educate our community by speaking in chapels and assemblies, and by hosting events. Earlier in the week, our faculty participated in a professional development workshop on gender diversity and supporting transgender, non-binary and Two-Spirit students.

Recognizing Pride Week, and the learning that comes with it, is a crucial part of our school’s identity and living up to our Values by showing Respect to all members of our community, helping us have Courage to be our most authentic selves, and having Honest conversations with ourselves and others, this week and throughout the year.

The importance of celebrating Pride Week was summed up eloquently by one of our student speakers who reminded all of us that the conversation is, first and foremost, centred around respecting people: “Remember the humanity behind things. It’s about language, yes, but it’s also about people. It’s about policy, but it’s about people.”

Here are excerpts from the some of the student speeches in chapel and assembly:

LGBTQIA+ rights sure have come a long way.

I look at the progress we have made in the world throughout the past 100 years, and my heart is full of nothing but hope for the generations to come after us.

That being said, it was not an easy journey to get where we are now, and we still need to make many more changes until the world is equally safe for everyone. Still, queer folks many countries are being persecuted just for existing. At best, they face discrimination from non-queer people in their community. At worst, they are fined, sent to prison and sentenced to death.

And although the west is more forgiving in its treatment of LGBTQ folks, we’re not perfect either. Did you know that in Canada, queer youth are three times more likely to consider or attempt suicide than non LGBTQ youth? And in Canada, queer youth are reporting higher rates of depression, anxiety, substance use, phobic disorders and self-harm than their heterosexual, cisgender peers.

Right now, progress is a major theme in both our school community and modern Canadian queer rights. The school has seen some recent additions, such as the formation of the Equity, Diversity and Inclusion Advisory Committee and Pride Club, and Canada has seen more recent progress in trans rights, with the human rights act amended to include gender identity and expression in 2017, and all provinces covering sex reassignment surgery as of 2020.

Although both communities may have a ways to go, we can only hope that recent surges of change within the last decades will bring us to a point where we can make peace with both our similarities and differences.

We have come a long way, but our world still needs to change so much more for the better. Being gay, trans, ace, bi, aro – none of it is a choice, and it’s not a mental illness and it isn’t a coping device for some other emotional burden. It is simply a characteristic of a person, as simple as being an introvert or extrovert.

Pronouns and preferred names are a big part of gender expression. They can help someone feel more in tune with how they feel on the inside and they make a huge difference in whether a person feels respected and accepted or outcast.

Pronouns are words that can replace nouns, and there are many different ones we can use depending on preference.

A very common gender-neutral pronoun is they/them. It is generally what we use when referring to someone whose gender is unknown, and it has been growing in popularity as a pronoun for people who do not identify fully or at all with the gender binary, or those who fluctuate along the spectrum. Pronouns don’t necessarily equal gender. Someone who is non-binary may prefer to use, for example, he/they or they/she pronouns – and this doesn’t make them any less valid and worth respecting.

Neopronouns are also another option. Xe/Xem/Xyrs, Ve/Ver/Virs, and Ey/Em/Eirs are all examples of neopronouns. They are used in the same way as the traditional gender binary pronouns, replacing someone’s name with their pronoun in the correct form.

Like pronouns assigned at birth, not everyone feels accurately represented by their name. In the case of many genderqueer folk, it's because of the very strict binary we have classified nearly each and every name into – labeling them as either boy names or girl names.

The most significant difference between a name given at birth and a preferred name is that the former isn’t always a title we are proud to wear.

A preferred name is a name that someone chooses for themselves and is how they prefer to be called. It can make people feel more comfortable in their own skin, as they are able to select something that is right for how they feel.

Whether that is a gender-neutral name, or a more masculine- or female-leaning one, it presents an opportunity for acceptance and expression; an opportunity that is normally not accessible due to the overwhelming number of assumptions people make about someone and how they identify.

Your gender identity is what gender you consider yourself to have. This can be a man, woman, non-binary, agender, demigender, genderfluid, and a lot more. A gender label is often something people find comfort in, and are most happy to operate under.

Keep in mind that gender is fluid, and though one might identify as something one day, that doesn’t have to be the same for the rest of their lives.

Neither gender or sex are binary, and both exist on a spectrum.

The gender binary is a social concept imposed on us. From birth, we are assigned a gender and socially conditioned to believe that it is the only way for us to live. We are divided into two categories: boys and girls. Pink and blue. Toy cars and Barbie dolls.

On questionnaires, people will often ask me to specify my gender. Male or female? Which is simply categorically wrong. There is so much emphasis on labeling to qualify for participation, to be put in a box, to be categorized and stereotyped.

One day, I hope there will be more room for fluidity and there won’t be an expectation for me to disclose my identity every time I meet someone to be respected and taken seriously. I also hope that institutions and schools will eventually implement more education so my knowledge about queerness doesn’t have to be derived from sources I have found on my own.

Gender creativity is so inspiring. It is so expansive that it has to be simplified to even start to conceptualize.

Think of three different colored boxes. On the left there is a red box representing a girl, on the right box, a blue one representing a boy. Now add in a yellow box in the middle to represent a non-binary person. Easy, neat, acceptable. Right? But what about the spaces in between? There is no room for nuance. Now, picture a spectrum. A continuum between the extreme blue and extreme red with yellow perfectly in the middle. But wait, isn’t the definition of non-binary not in the gender binary? It can be somewhere on the spectrum or outside it altogether. Gender Identity can intersect with any combination of sex, sexuality, gender expression, pronouns, and so on. Think of gender more like a plant. Complex and diverse. In nature, gender-Queerness is the norm. We don’t try to divide plants into neat boxes. We just let them exist and grow and thrive.

Confusing, right? It’s probably more confusing for queer people. But, imagine how powerful it would be if we became comfortable with our confusion and used it as an opportunity for growth instead of denying people’s existence.

We hope that you can harness your confusion to educate yourself and work to dismantle systems of oppression by implementing small changes in your own life. At the end of the day, the most important thing is to have positive intentions, keep an open mind, and treat people with respect.

Here are a few things you can do to be an ally to the queer community and facilitate change:

The most important thing we can all do to create a better world is to listen and have compassion for one another.