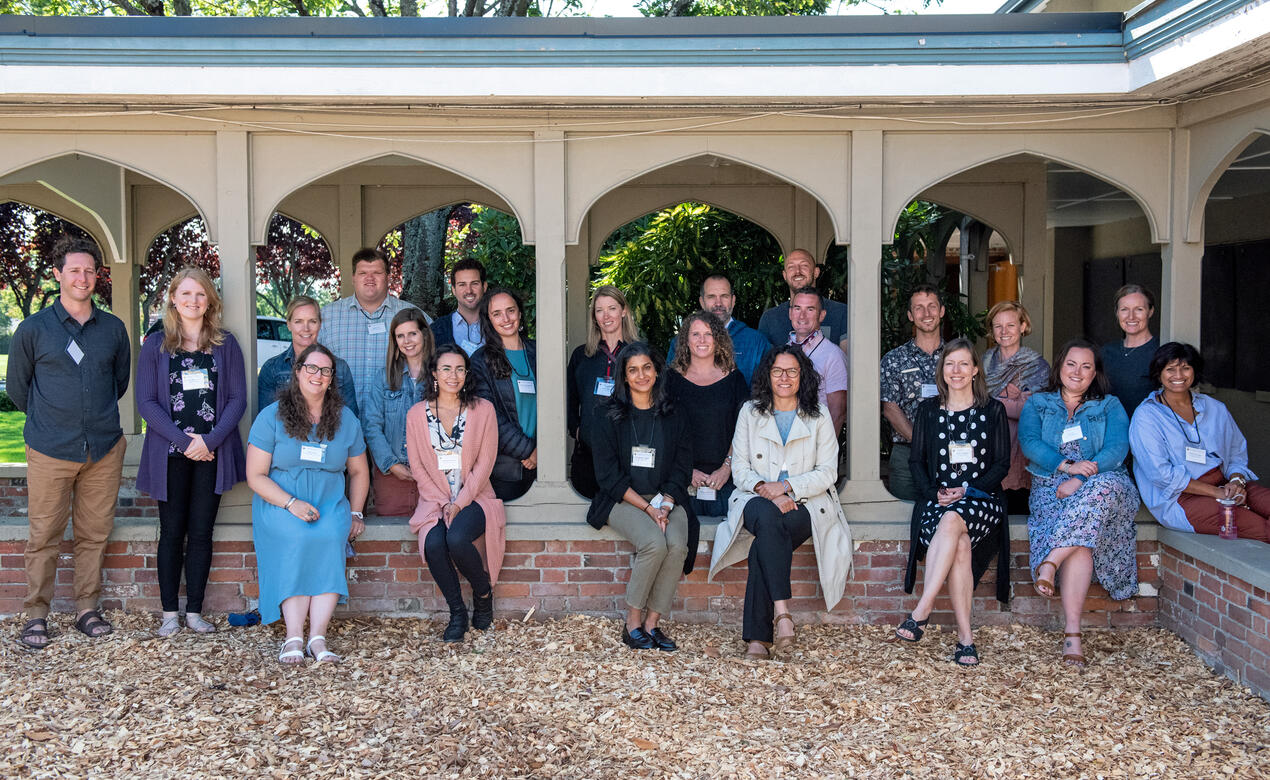 We are delighted to welcome 14 talented educators to our community for the start of the 2021-22 school year. They bring a wide variety of expertise and teaching experiences to our Junior, Middle and Senior Schools.

We are lucky to have this amazing group of teachers join our community, and we look forward to seeing them work with our students.

Read each of their biographies below:

Nicole comes to SMUS as an English teacher at our Senior School. She is originally from Kitimat, BC, and came to Vancouver Island initially to study at the University of Victoria. She has taught at independent schools in Victoria, as well as a private school in Shanghai, China. Outside of work, Nicole is passionate about health, wellness and connection, saying, "When I prioritize these three aspects of my life, I find I lead a more joyful, balanced lifestyle." She is looking forward to connecting with staff at SMUS and creating memorable moments together.

Kelly joins our community as a Middle School math and science teacher. She spent most of her life in southern Ontario – Toronto, Guelph, London and Pickering – going to school and starting her teaching career. She has a Bachelor of Science in Human Kinetics, and a Bachelor's and Master's of Education. She has taught math and science at independent and private schools in Canada, Beijing, China and Frankfurt, Germany. An avid athlete, she is a former competitive soccer player (who now enjoys coaching) and has most recently discovered a love for the Irish game of Gaelic football and its community. Kelly says she also hopes to be able to use her Mandarin skills to support the Middle School Mandarin language program.

Splendid begins her role at SMUS as a Middle School associate teacher. She was born in Prince Rupert and moved around a lot as a child, spending the most time in Chilliwack. She earned her Bachelor's of Social Work from Thompson Rivers University in Kamloops. While this is her first teaching position, her career has brought her into many classrooms to work directly with and support children. "I am really excited to come back to offering support to children, and working with schools is something I want to do for the foreseeable future so I am very excited to start this new opportunity." Outside of work, Splendid enjoys hiking, paddle boarding and skiing, and spending time with family and friends.

Alana joins us as a Senior School English and social studies teacher. She is originally from Vancouver Island, having been raised in the Comox Valley. She went on to the University of BC, where she earned her three degrees. For the last 11 year, she has taught a wide variety of courses at an independent school in West Vancouver, from English to drama to AP Seminar. Outside of work, Alana is passionate about gardening, singing, playing board games, community theatre, sports and spending time with family. She and her husband, Byron, a member of Canada's Olympic wheelchair rugby team, have a two-year-old son, Sawyer. Alana says she is looking forward to joining the family community that SMUS has created.

Stel.la joins our Senior School music department as our new strings teacher. She was born and raised in Spain, and earned a degree in violin performance from Conservatori Superior de Musica del Liceu in Barcelona. She has taught violin, strings, chamber music and general music classes at schools in Spain, England and, most recently, Vancouver. She earned her Bachelor's and Master's degrees in music education from the University of British Columbia. She has also taught and led orchestras outside of schools, including the Debut Orchestra with the Vancouver Youth Symphony Orchestra. "I'm looking forward to getting to know my students and to have fun making music together," she says. In her spare time, she enjoys travelling and being in nature with friends and family.

Caitlin comes to SMUS as a Senior School math and science teacher. She is originally from Kingston and remained in southern Ontario to attend Trent University in Peterborough. She earned her chemistry and education degrees through the Queen’s-Trent Concurrent Education program. Caitlin has taught math, science and chemistry in Belleville and Calgary. She enjoys spending time outside in the sun, walking her dog and playing with her daughter. Caitlin says she is excited to bring her skills to SMUS, and to learn new concepts, curriculum and strategies in our school environment.

Kate is our new Senior School Head of English and a familiar face to many in the SMUS community, having previously been a University Counsellor and Interim Director of the Middle School. She is originally from Penetanguishene, Ontario and raised nearby in Elmville and Orillia. She earned her degree in history and English literature from Trent University, and her education degree from Queen's University. She has had a varied career in education, from teaching in Nunavut to teaching aboard Class Afloat (a tall ship-based school). In her two years away from SMUS, she travelled in South America, and worked in the Canadian Arctic and Vancouver. "When I think about returning to SMUS, I am most excited about the people – students, parents, faculty, and staff. I love the energy of the community and the opportunities to try new ideas with curious, committed people."

Marie comes to SMUS as the Grade 3-7 French teacher at our Junior and Middle Schools. Marie is originally from France, where she was raised on the west coast in Lorient and earned her Master's of Education degree in nearby Rennes. She has taught at schools in London, Seattle, Vancouver and, most recently, at École Victor Brodeur in Victoria. Outside of school, Marie is passionate about being outdoors, particularly paddleboarding and camping. She is also deeply interested in environmental activities and organizes a weekly beach cleanup. She says she is "looking forwarding to being part of a new community and meeting amazing teachers and students."

Cara joins our Middle School administration team as our Assistant Director of Student Life. Raised in Sharon, Ontario, she went on to study at the University of Ottawa where she earned her honours degree in history and geography, specializing in Indigenous post-contact history and paleoclimatology. Cara subsequently earned a Bachelor's of Education and Master's of Education, from Queen's University and the University of New Brunswick, respectively. She taught English, social studies, history, and digital art and design at an independent school in New Brunswick, and also oversaw the Middle School academic program for one year. She and her husband, Byron, moved to Doha where she worked at the Qatar Canadian School, before moving back to Ontario to join an independent school as Head of Junior Boarding. Outside of work, Cara loves photography, particularly photographing animals and landscapes. She says she is "excited to be immersed in the SMUS community, especially meeting my future colleagues, the students and their families."

Jonny joins our Middle School as a physical education and humanities teacher. He was raised in Victoria and earned his Bachelor's of Education from the University of Victoria, followed by a Master's in Educational Leadership and Policy from UBC Okanagan. He has been teaching for more than a decade, in both the public system and, more recently, at independent schools, in Kelowna, BC, and London, Ontario. "I'm looking forward to meeting the staff, students, and families and contributing to the academic and extracurricular programs," Jonny says. Outside of work, he enjoys the outdoors and being active: hiking, biking and playing volleyball. He says he's excited to be back in Victoria with his wife, Abbey, and their dog, Harry.

Paul joins our Senior School as a physical education teacher. He is originally from Birmingham, England and grew up in a large Irish community there. He earned a Bachelor's of Education degree in physical education from the University of Birmingham and taught in the public school system in England for about a decade. Since then, Paul has taught in Victoria, including as a substitute at our Junior School last year. Naturally, he is passionate about sports, having been an international runner representing Ireland on the track, road and cross-country. He is also an avid cyclist and is well-entrenched in the BC sport community as an announcer and commentator for many events, including the TC10K. He and his wife Jacqueline have been married for 35 years, and have four children and two grandchildren. Paul says he is "excited about joining the community at SMUS and sharing my passion for exercise with the students. I'm also excited about forging contacts and links with the parents and faculty, and immersing myself in culture of the school."

Lynique comes to SMUS as a math and science teacher at the Senior School. She was born and raised in Johannesburg, South Africa and earned her Bachelor of Education degree in natural sciences and mathematics from the University of Johannesburg. She has taught science and math at schools in South Africa, Saudi Arabia and China since she began teaching in 2014. An avid birder outside of work (she thanks her grandfather for instilling this passion in her), Lynique says she is looking forward to broadening her knowledge of birds in the Pacific Northwest. She is also involved in The Duke of Edinburgh's International Award and enjoys leading outdoor trips through the program. She says she is "excited to inspire young minds, create a love for science, and to have an active role in the SMUS community."

Chris Webster joins our Middle School as the personal counsellor. He was born in Ontario but spent most of his life in BC, including some time in Victoria where he attended UVic to earn his degree in psychology. He also holds a teaching certificate from Simon Fraser University and a Master's in Counselling Psychology from UBC. He has been an educator for 23 years at schools in Canada, Australia and England, and more specifically as a counsellor for the last 12 years. Outside of work, Chris is passionate about cycling, photography and his family: his wife and two children. "I am very much looking forward to meeting the people – both the faculty and the students. The welcome I have received has already been a very warm one, and I look forward to getting to know the wider community."

Rebecca joins our Junior School community as an associate teacher. She was born and raised in Victoria, and attended Camosun College and the University of Victoria. She studied biology, chemistry, physics and language arts, before transitioning into the teacher education program at UVic where she earned her degree. She has spent her career so far in the Saanich School District, most recently teaching math, art, science, social studies and physical education in elementary schools. Outside of work, Rebecca is passionate about gardening and being outdoors, as well as reading, because "I love learning, exploring new worlds, and connect with others through book clubs." Joining SMUS, she says she is most looking forward to "connecting with other individuals passionate about the outdoors, learning, and exchanging ideas."